The Task of the Catechist Part 1

Characteristic #24 The Tasks of the Catechist 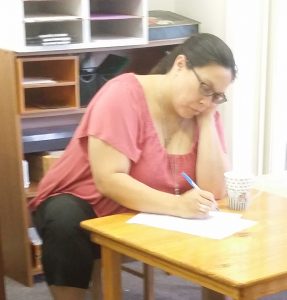 When preparing to serve the needs of the children in the atrium, I find it helpful to remind myself of my role and task in this process. As each Catechist undergoes formation it can be a massive amount of information being received in a relatively short time. Much of this is also changing the way we have viewed working with children in our past.

Often adults view their role as instructor and leader. We think we have a responsibility to fill our children with the information they need to live god Christian lives. Many times this is true and for parents it is certainly a major responsibility. However, in the atrium, our role is quite different.

The adult in the atrium must be humble enough to become less and allow the child to become more. They must take on the role of servant and observer. Following carefully what the child is doing and what their next need may be to determine how they can be served.

When a child is ready or asking for a particular presentation, it is desirable that the Catechist is prepared to give it. How frustrating it would be if we were at a restaurant and order something on the menu only to be told the chef needs to practice cooking it before you can be served. The formation of the Catechist goes beyond the formal training days and must include preparing album pages and reading texts and other materials so that they are ready to give to the children.

This does not mean that we have to have every part of our presentation rehearsed or perfect, as often the children bring something to the presentation too which highlight or goes deeper into a particular aspect of the work. Instead we must be confident in the Holy Spirit working through us and using the knowledge we have received through our preparation to meet the child in their work.

The core texts for Level 1 (children from 3-6 years) are: 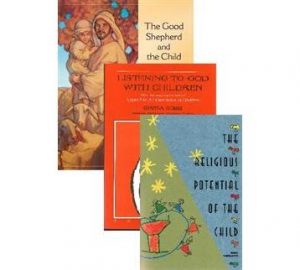 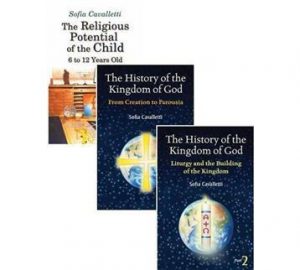 These texts give us the basic background to the children and the presentations at each level. Then we can go further by prayerful reading of Journals and other Texts available from Catechesis of the Good Shepherd and other biblical and liturgical sources. We should also be spending time in prayer and participating in the life of the Church.

Being a Catechist of the Good Shepherd becomes more of a religious calling and way of life that merely providing a service to the children. It is a blessing for the children, the parents and the catechist to be a part of this work. It is a work which calls us all ever deeper into the mysteries of Jesus, the Good Shepherd.

Characteristics of the Catechesis of the Good Shepherd

What are the principal points which distinguish this catechesis and because of which it is called the “Catechesis of the Good Shepherd”? The following characteristics are intended to represent the principal aspects of the catechesis as they have emerged after more than fifty years of work with children of different countries, cultures and socio-economic backgrounds. These characteristics are reflective of the constants which have presented themselves in this work and are presented here with the invitation to go deeper into them for further reflection.

(The first draft of these points was done by the Rome Association, May, 1993. They were offered for review to the first International Symposium, October 1994, in Rome. Amendments were proposed at a meeting in Rome, March 30, 1995. The points were then revised by the International Council, October, 1996.)

Source: Catechesis of the Good Shepherd

© Catechesis of the Good Shepherd WA | Web Design by Intelliwolf